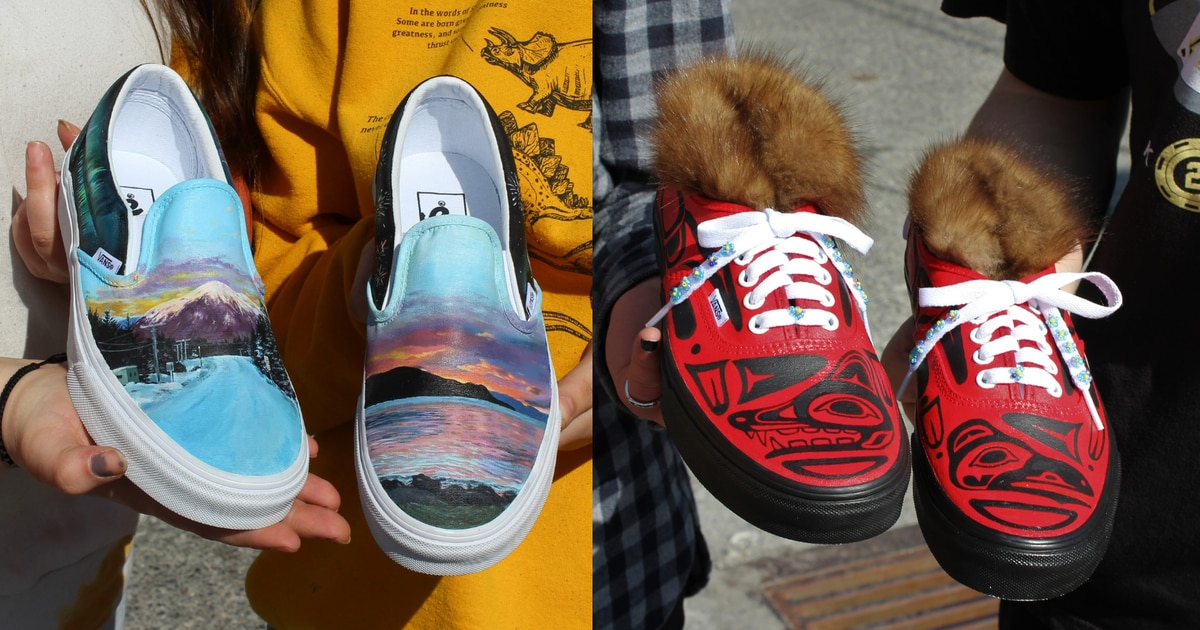 Wrangell High School is one of 250 schools nationwide selected to design a pair of Vans-branded shoes that represent community pride. Winning the contest could net the school’s art program up to $50,000 in prizes.

“I guess the important thing was that we have our landscape and what’s around us, but also, the other important thing about our city is like local art and native art,” explained Baggen. “And so we really thought it was important to portray that as describing our city, we couldn’t leave that out.”

A pair of Vans – the slip-on style – show orange-pink sunset landscape scenes on the toes.

“So that’s just a picture of the nose that I took in front of Bob’s,” Baggen said, pointing to one of the shoes, “And I just thought that was a pretty iconic Wrangell symbol. is on so many stickers and artwork and stuff so it must be on the shoes.

It’s a bit like Wrangell’s jargon: the “nose” is the tip of Woronofski Island, across the strait from the city center. It looks like an elephant’s nose. And Bob’s is the former name of one of the two supermarkets in town, Wrangell IGA.

The sun setting over Woronofski’s nose adorns the summer shoe, along with tiny fireworks, bursting across the water painted along the heel – the 4th of July is Wrangell’s biggest holiday. Snowy sunsets and the Northern Lights adorn the other shoe.

“Symbols of winter, symbols of summer, just to kind of show the spirit of our city,” Baggen said.

The second pair of sneakers are covered in red and black Tlingit-inspired formline designs – a wolf and a raven. Tiny beaded blue flowers run down the laces and white buttons line the heels, reminiscent of a Tlingit button blanket. The long brown fur cuffs overflow the ankles of the shoes.

It’s the ermine, trapped by senior art student Rowen Wiederspohn nearly a decade ago: “Behind my house at 3-Mile (Zimovia Highway),” Wiederspohn said. “There’s an old forest trail there, and my brother used to get on four-wheelers and set up a trapline.”

Baggen added, “We had some kind of mangy mink fur that we’re going to put in there. And he’s like, ‘No, no, no.’ And brought (the ermine). It’s so much better.

Baggen led the shoe painting project, with help from Wiederspohn and other students in the class. Senior Sophia Hagelman helped design the Formline wolf, for example.

Art teacher Tasha Morse said designing two pairs of shoes was not part of the high school curriculum at the start of this year.

“Honestly, we found out about this competition through TikTok,” Morse said. “There was a student who was like ‘I found this contest’ and told Paige about it. And Paige was like, ‘Oh my God, that’s so cool.’ ”

Morse said that with the help of the school counselor, she filled out the application for the class.

“Well, imagine my surprise when a few weeks later I received a ‘Congratulations, you’re one of 250 schools in America that received these Vans shoes to paint for a chance to win $50,000,’ Morse said, “And I was like, ‘Oh man, this got really real, real quick.’ ”

It is part of the Vans Custom Culture High School contest, now in its 13th year.

“The requirements are two pairs of shoes,” Morse explained. “One is hometown pride, which is obviously Wrangell. And the other pair is meant to be one of the four pillars of the Van Doren (the co-founder of Vans) legacy, which I have discovered are action sports, street culture, music and art.

For Van Doren shoes, the students chose to focus on art, specifically Tlingit art. Morse said boiling Wrangell into iconic imagery for the other pair of hometown-focused shoes was a collaborative effort.

“We had class-wide discussions and my whole whiteboard was filled with ideas like what makes Wrangell Wrangell, why are we lucky enough to live here,” Morse said. “And it all came out: we have the river, we have the glaciers, we have the wildlife, we have the 4th of July, we have the petroglyphs…”

The entire project happened under a tight deadline, according to Morse. Many students fell ill, some with COVID-19, after regional basketball games in mid-March, and shoes got lost in the main office mail pile for a few weeks. The students met every day after school, Morse said, and Baggen took the shoes home on the weekends to continue the work.

“I couldn’t even begin to calculate (the time spent in the shoes),” Morse said. “I would say there are over 50 hours in the shoes easily.”

Morse says there is a buzz in the class – they think they have a good chance in the competition.

“We just try to be very positive and forward thinking and keep it light,” Morse said. “We went from not thinking this was probably ever going to happen to ‘Oh my God, we have shoes and now we’re in the middle of this.’ ”

“Secretly not so secretly very competitive,” Morse said, “So I’m like, ‘We’re going to win. ”

Baggen continued, “We need the money. Of course, there are a lot of schools across the country, and everyone is suffering from the same issues: COVID is an issue, it’s hard to get people to work (in schools), but we have really specific issues. that apply only to us.

Morse says schools in Wrangell have had to reduce their artistic offerings.

“For the past two years I’ve been an art teacher and I’m a qualified music teacher,” Morse said. “There are things I can do in art, there are things that are very similar: the mindset and the creation and the ‘Don’t give up’ attitude and that kind of thing. But we went from full-time art a few teachers ago to now it’s just me and another teacher in middle school, and that’s our art program right now.

But it’s not just a question of personnel. Morse kicks an almost empty plastic trash can that stands near one of the doors: “It’s my clay, and we’ll collect it for the next time we do a clay project.” We miss things like – we don’t have black acrylic, we had to use black tempera (for the shoes) and then use fixative so it wouldn’t fall off the shoe. We got very creative very quickly.

Supplies are also expensive to get to an island.

“I just bought a gallon of milk for $9 at the store, and a gallon of paint costs more than that,” Morse said. “Add barge fees or USPS fees, UPS fees or FedEx fees or whatever, it’s expensive. We do clay, we do glass, we do paint, we do portraits, we do all those things. And these are expensive. They do not regenerate. You can’t take what you did last year and turn it into something new.

Baggen, who wants to pursue a career in animation, says she thinks it’s vital for the community to have art programs in schools. She thinks that participating in this contest could be a way for her and other students to give back.

“It’s important,” Baggen said. “You want a complete, good and valuable education for your children. And we only have one school. So that’s something that we can kind of give to the community because, you know, we’re trying to make things better and make sure that everybody can get a good art education, because the arts are super important .

Over the next few weeks, judges from shoe company Vans will determine the top 50 schools, then open an online public voting period from April 25 through May 6. More information about voting can be found at customculture.vans.com.

If Wrangell is one of the top five schools, students could earn between $15,000 and $50,000 for the Wrangell High art program.

The Last Tour Guide to Leave Cuba – The D&S Blog