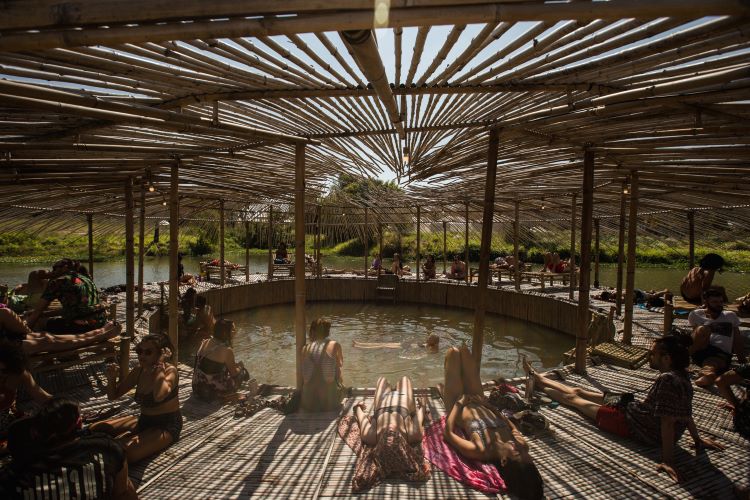 The festival consists of workshops and events that seek to connect people with nature, through art, music and rituals. According to the studio’s creative director, Ab Rogers, Wonderfruit’s key philosophy is to “minimize the environmental impact” of the event.

Consistent with this thinking, Rogers says that all structures are designed to be “friendly to their environment.” The techniques used by the studio were “inspired by local craftsmanship” and the materials chosen were “locally sourced and reversible”, he adds.

This is the third consecutive year that Ab Rogers Design has worked on the festival, each year taking on new inspiration and a different design route.

Once the festival is over, the structures can be reused and recycled, which will minimize the amount of waste generated by the event. Rogers explains that the color palette also draws inspiration from “fertile wilderness greens” and also features “vivid red hues”, which were chosen to stand out from the rest of the palette.

Upon entering the fields, visitors will be greeted by “a series of theatrical webs” designed to look like an optical illusion and also to block visitors from seeing what is inside the festival, Rogers says. At the heart of the festival is the Ethos Pavilion, “a giant shade made from salvaged parachutes and set within a perimeter of bamboo” which Rogers says will protect festival-goers from the sun.

Another structure that uses bamboo is the Festival Theater, which Rogers describes as “a giant bamboo tent”. Inside the tent are five ring-shaped tables that surround a central kitchen.

From the natural baths and pools – the public baths – Rogers says visitors will see “a series of flying saucers levitating on a network of floating platforms made of eucalyptus wood”. This structure is separate from the main island platform, so people have to use floating rafts to cross the lake and access these facilities.

Around one of the largest stages are “the living villages”. The design of these structures is inspired by the “sensory parts of the body”, such as the hand, the ear and the eye. Different events focusing on manufacturing, catering and dancing will take place here.

In a field of flowers, Ab Rogers Design designed a mirrored infinity tube with a screen in its center, showing a Katsuma film.

“All of the structures are intriguing, organic, dynamic and provocative,” says Rogers. They try to provoke questions and “celebrate the curiosity, generosity and open-mindedness at the heart of the festival,” he adds.

Wonderfest 2022 will take place in December, so this year’s festival structures are not yet complete.