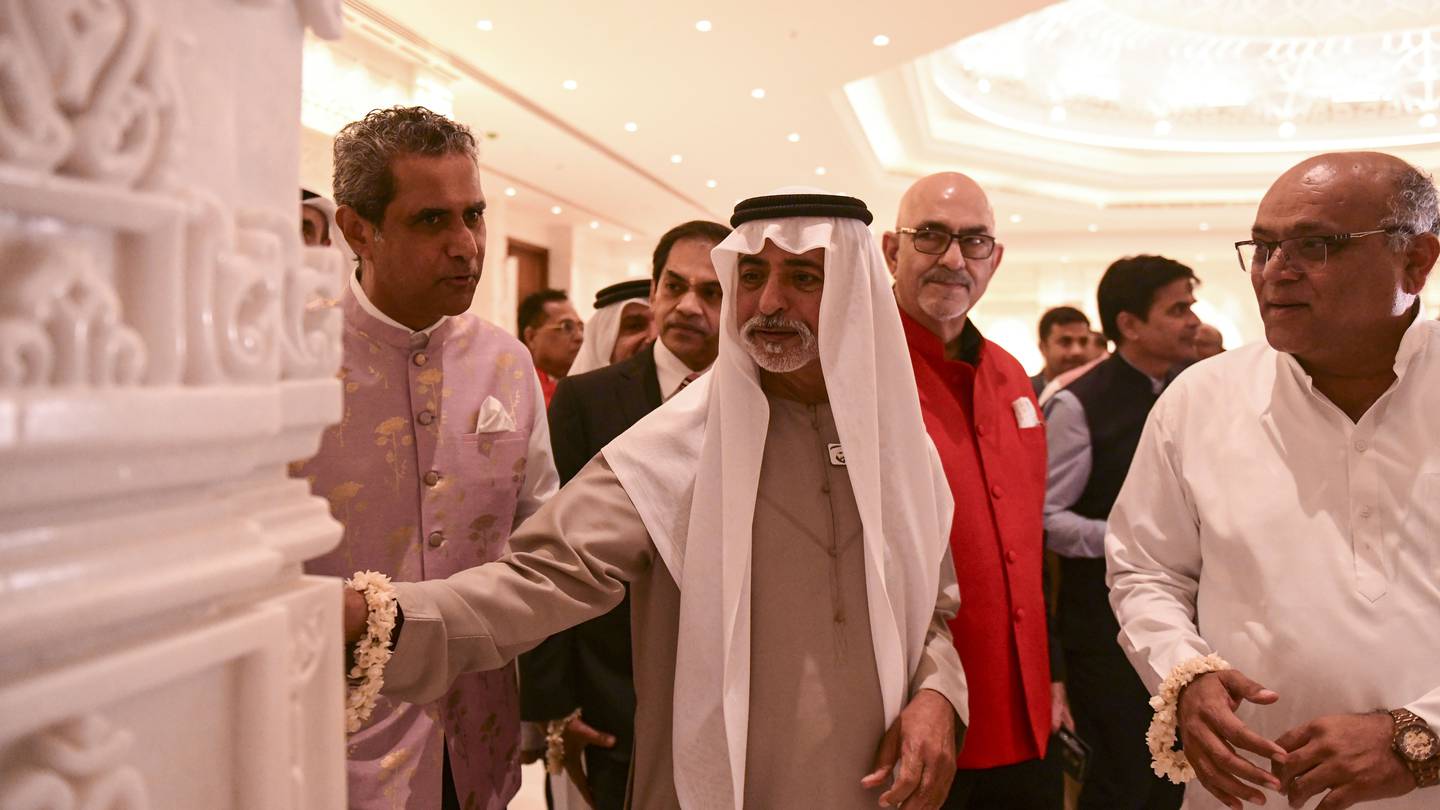 Twinkling lights, dazzling flowers and a powerful message of faith bringing people together marked the grand opening of Dubai’s new Hindu temple in the village of Jebel Ali.

The emirate’s newest place of worship officially opened on Tuesday to interfaith leaders and government officials who joined community members in the white marble temple decorated with colorful chains of marigolds.

They visited the temple with religious figures representing different faiths.

The opening ceremony marked the celebration of a structure built over the past two years that features detailed hand carvings, ornate pillars, brass spiers and striking lattice screens that blend Indian architecture and Arab.

The Hindu Temple in Dubai will truly unify the community and provide them with a place to gather and celebrate their faith, rituals and ceremonies.

Raju Shroff, an Indian businessman who led the community project, described it as a modern temple built to last for generations.

“This temple is a true representation of how I view religion – open to all,” said Mr. Shroff, administrator of the Sindhi Guru Darbar who oversaw the design and construction of the building.

“This temple will be a true emblem that cultures can unite; harmony can be found and it is here in Dubai.”

The inauguration took place on the ground floor of the temple, a space that will later be used for chanting sessions, weddings, birthdays, banquets and community gatherings.

“The Dubai Hindu Temple will truly unite the community and provide them with a place to gather and celebrate their faith, rituals and ceremonies,” Mr. Shroff said.

“We have worked tirelessly to bring together 16 deities representing Hindus from all over India, from north to south. We want this place to be a home of peace and serenity for every person who walks through these doors.

He said the temple was made possible through the support of the community and the government of Dubai.

Mr. Shroff’s family helped build the Bur Dubai Temple in 1958 and asked the emirate authorities for space to build a larger place of worship to accommodate the growing community.

The two Hindu temples in the United Arab Emirates are housed in parts of old buildings in the historic heart of the city.

Mr Shroff said the dream was to build “a modern, spacious and easily accessible temple where young and old could learn and practice their faith and which would serve as a hub for the growing community in the future”.

He called the new construction the “Dubai temple with an Arabic design built for future generations”.

The expected number of worshipers for festivals such as Diwali is over 100,000.

The sandy area of ​​Jebel Ali is often referred to as the emirate’s religious corridor: a low boundary wall separates the temple from the adjacent Sikh gurdwara and the area is also home to six Christian churches.

Mr. Shroff called the area a “village of worship” that tells a story of collaboration and peaceful coexistence.

“Our children will be the first generation to experience a variety of religious houses in a district,” he said.

“They can walk from gurdwara to churches, temple as well as mosques and really absorb prayers, blessings and vibrations.

“And with a village of worship, generations, nations and history will remember that Dubai is a place that welcomes everyone with open arms.”

Mr. Sudhir, the Indian Ambassador, said the temple meets the religious aspirations of the large Hindu community living in the Emirates.

“We thank the government of Dubai for their kindness and generosity in providing land for the temple and facilitating its construction,” he said.

“We also thank the Government of the United Arab Emirates for providing second homes for 3.5 million Indians where they live and work and contribute to the economy and society.”

The temple opens to worshipers on Wednesdays from 6 a.m. to 8:30 p.m., in time for the Hindu festival of Dusheera.

Online reservations are required for entry. Register on Dubai Hindu temple website to visit or worship.

As summer draws to a close, the brightly colored flower arrangements on Main Street will be the last to go

Loans in case of difficulty: what is it?