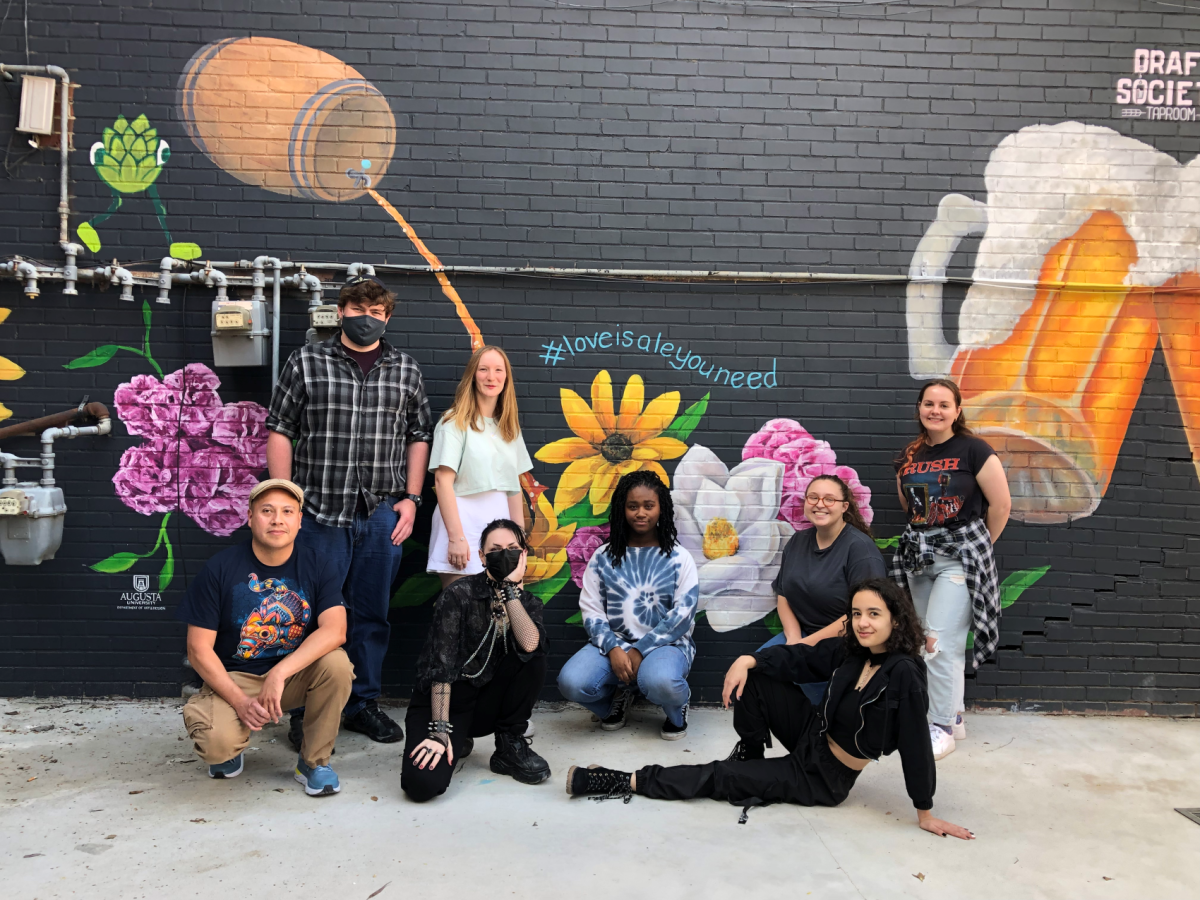 It took almost a year to prepare, but Augusta University’s Department of Art and Design at the Pamplin College of Arts Humanities and Social Sciences recently completed a large exterior mural for the courtyard of the Draft. Society Taproom.

Originally, they had planned to start painting during the fall semester, but the project was postponed until after fall vacation. Now it’s over and everyone involved in the project is delighted with the result.

“It was exciting to have the opportunity to transform a space like this,” said Cynthia Epps, Lecturer in the Department of Art and Design. “A blank canvas is always intimidating and full of promise at the same time.”

This blank canvas was an aisle outside the dining room that was turned into art to represent their business.

With 16 students in Epps’ Painting I fall class, there were plenty of ideas for what the mural would look like. After working together to narrow it down, they found a way to tie everything together for the beer garden design. Since it was a large space, they were able to incorporate flowing flowers throughout, beer hops with wings on them, a pouring keg and two overflowing mugs.

None of the students had worked on a mural of this size before.

“I was nervous, for sure. I had never painted on anything that wasn’t a canvas or a primed house wall. But it was surprisingly quick to get used to,” said said Jacob Zimmerman.

“When I first saw it, I was surprised because I know big projects like this are very difficult to achieve to the fullest,” Onyx Jankiewicz added. “The only issue I would say was painting over the material itself as it’s uneven and having to do optical illusions to make sure everything looked flat and perfect.”

Epps said that for some it was out of their comfort zone as they had never painted anything of this scale, but they were able to overcome the difficulties. She discovered the strengths of some of her students and allowed them to contribute in those areas.

“When working on group projects like this, I usually ask students what aspect of the mural they find most interesting – what would they like to work on? By allowing them to contribute to the areas they are most passionate about, they are more willing to invest in what they do, and that produces better results,” added Epps.

The green hop “wings” were one of the most important and probably the most difficult parts of the mural. Alena Pfiefer designed the wings, but transferring that design to the brick wall became a challenge.

“Prof Epps explained that these wings had to be modified and scaled to fit the majority of an individual’s size as this was a photo-op piece for clients” , said Pfiefer. “I was intrigued by how we had to change the height, width and length of the wings to accommodate a different height scale. This element was something so important, but it surprised me so much!

“We wanted the wings to be even, so we were going to use a spotlight on the wall. But we realized it was too bright outside to use that, so the wings were painted freehand! says Dy ‘Ane Bunch.” Mrs. Epps did a fantastic job equalizing them.

When the mural was said and finished, everyone was happy and proud of the finished project.

“I was really amazed at how well it turned out! The whole area transformed and seemed so much brighter. I’m not proud of many things, but this was one” , Zimmerman said.

“When I stood back to watch it all, I was impressed. I think everyone can say that we have worked hard and diligently on this file and we have all worked so well together. We have artistic styles different and are on different artistic levels, but we have flowed together artistically and it shows,” Bunch added.

“It was a great opportunity for the students to apply the skills they learn in the studio and see that they have the power to completely change a space. Public art is changing the perception of downtown Augusta, and participating in projects like this allows students to be part of that change,” Epps added.