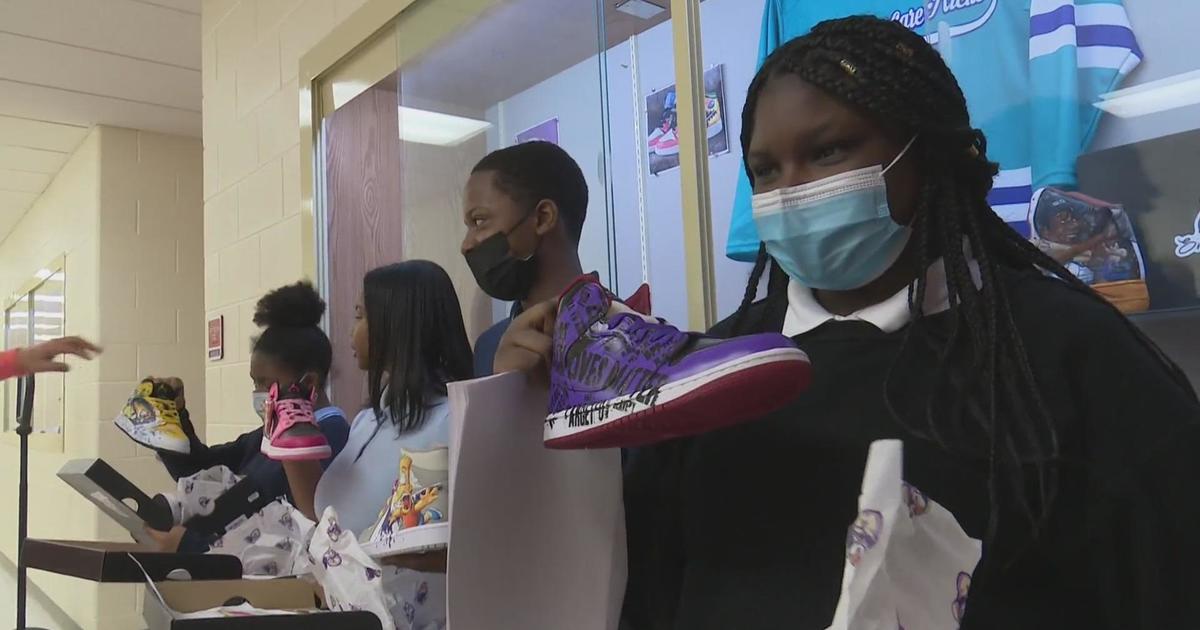 You would expect such big words for a high school English assignment. Instead, an elementary school art class explores these somewhat heavy themes.

CBS 2’s Lauren Victory took us through some of their recent projects.

Students at the Jesse White Learning Academy, at 16910 Western Ave. at Hazel Crest, waited months for a drumbeat to fill the halls. The rumble was for the results of a mission like no other – to design sneakers that represent history or the future.

Teacher Ben Salus explained that he wanted his K-8 students to understand concepts like color theory while challenging them to think critically.

“Everything my students work on, even if it’s clay projects or self-portraits; the collages we’ve made – they’re all based on memories and stories,” he said. declared.

A new hallway mural with masked faces is one such project. Of course, the masks are a permanent reminder of the pandemic pain, but Marialena Angulo – whose figure is one of three faces on the wall – wants you to take a closer look to see positive messages too.

“To make people more proud of themselves, get them to stand up if they’re feeling down,” explained the fifth-grade student who co-created the mural.

The hope is that the administrators of Hazel Crest will greenlight many more murals created by children.

He received over 500 submissions this school year for another round of custom kicks, but with a more targeted directive. Instead of drawing anything, Salus asked students to draw something that “tells us the story you care about and/or the future you want to create.”

• Antonio Lloyd, 7th grade student. His shoe design was a tribute to the popular animated show “The Simpsons”. “The art teacher told us to pick something that predicted the future, so I picked The Simpsons because they predicted COVID,” he said.

• Xaria Best, 5th grade student. She conceived her design as a message about commercial overfishing. “In the future, if all the oceans are gone, I can’t be a marine biologist,” she said.

Professional painter Anthony Amos brought all of the winners’ designs to life by custom painting all of the shoes. He said the sneakers took him anywhere from hours to days. All shoes are wearable and waterproof.

The next step for Salus and her team of kid artists is to design custom mugs made with the Pottery Kiln to reduce mug waste.

Lauren Victory is a Morning Insider reporter for CBS2 Chicago. Lauren joined the station in May 2016 and is a graduate of Northwestern University’s Medill School of Journalism.

The ultimate guide to filing a patent